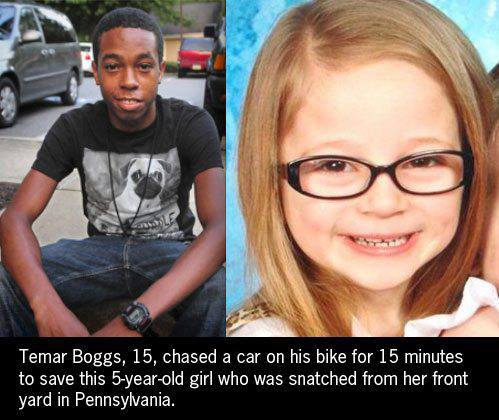 "Will this young hero get as much attention as Zimmerman... NO!

Will he get his picture on the Rolling Stone?... NO!

I don't see a color, I see a young man whose parents did something right!!

People in this state get real angry when I post truth's like this. But I have to display my disgust with their feelings both past and present. I hear statements of disgust and anger about the Mexicans and "their damn language everywhere" when I am in the supermarket, doctors waiting room or just in the homes where I am a guest. I am from Wyoming and have a different upbringing, so this stuff does not set easy with me.

They are very open and "matter of fact" with the belief that negroes are mostly dangerous and tend to want to rape white women. These comments come mostly from Nebraskan women too. The men are very much more reserved, but the feelings are similar for many of them as well.

This is the most populated state I have ever lived in, and I have lived or worked in all 48 contiguous states, with selectively bred Caucasians who are not in any way supportive of mixing of blood with other races. They do, occasionally, but for the most part are repulsed by the idea and practice.

So it is for this reason I have bothered to risk my life and post such a "slap in the face" to a group of people who will take whatever action possible to retaliate. It may seem unthinkable to many who read this posting, that there are Americans who feel, and so would act this way in this day in time, but there are.

I am a mixed race German/American-Wyandot Native who was favored by a Kansas native who was a Deputy Fire Chief in Orleans Nebraska. I had come to the state to look after relatives who were elderly and in need. I was approached by the deputy Fire Chief, after I established my upholstery business and was building my home in town, to be a volunteer Fireman because of the obvious asset of having my house and business within 2/10ths mile of the fire hall and my past experience and training in the United States NAVY and past Fire Department history. I accepted and was confirmed by a near unanimous vote. The only "naye" vote came from another "hose stretcher" who was born and bred in that tiny town of under three hundred souls.

It was clear there were at least three individuals who did not want me on the department but they kept their feelings quiet. One ( Captain Thomas) tried to kill me by sending me into a structure fire with a SCBA that was malfunctioning, and others just refused to accept me as a member of the team.

No worries until I had left the area for work, so could not be counted on for emergency calls anymore. I was re-assigned to auxiliary by the Deputy Chief and told I could just respond to calls when I was available. My work as an over the road truck driver eventually took me away for long periods of time so my contact was terminated with the department. Eventually the one detractor who voted "naye" on my confirmation had risen to become Chief. He made it his mission to have me removed from the Nebraska State Firefighters Association so I could no longer advance in my quest to glean certifications from the state fire school. I was not willing to lose this privilege, so used my status as a domestic corporation to form a Fire Brigade for my companies private use, which opened that door back up for me and my Brigade members to attend the state school.

I will, of course, not be able to glean any more certifications because the State Fire Marshals have decided to single myself and my Brigade members out so we will not be able to achieve a passing grade in any areas we test for. The State fire Marshal's office was so incensed by the fact that I was able to do an "end run" around the unjustifiable denial of my past membership in the NSVFA, that when my storage facility for my business caught fire the Fire marshal sent to investigate, ordered the Sheriffs Deputy to order me "off of his fire scene", even though I had been seriously burned attempting to control the flames while I waited 31 minutes for the district Firefighters to travel 12 miles to the scene and then six more minutes from "boots to ground" to a charged line. I was not allowed to move any of my vehicles or touch any of my property in an attempt to save it. Everything was lost completely. Then I was told by the Fire Marshal that he was going to write a scathing report that would open the door for my insurance company to deny any claim on grounds of "gross negligence" on my part. He informed me that day.. "if you write any contradiction to my report I will come back", which I can only understand would have meant he would retaliate in some illegal fashion.

They are, if nothing else, a corrupt bunch who do not like to be bested in any way. The look on his face was priceless when I informed the little tyrant, ( he was about 5'1" tall ), that I had not yet secured insurance. Now his whole plan to ruin me was lost, but the outcome was the same.

Having started with nothing when I arrived in this state made a situation that seemed like the end, become just a mere setback. So I am happily just rebuilding with limited funds but ample desire, ability and determination. Hopefully I will be far from this place in a year or two.

The third degree burns on my arm and face have all healed up , with no help from the local Red Cross and I have been fazed out of the volunteer position I held in the Kearney chapter of the Red Cross as well as my usefulness as a Color Guard in the Kearney American Legion post, so I am free to "move along" as it is the wish of this area's people and the aforementioned organizations that I do so.