My day going out on calls with the crew from station 13 afforded me the opportunity to ride along with the team on the pumper for half of a day and was given a chance to see how a city crew operates on calls.

Chief John deHooge set it all up for me and as all of you who know him might expect, he made it fun for me. First off he assured me that I would be afforded a ride to the station, that is, he would send someone to pick me up at the Ottawa Sheridan so I would not need to spend my own money on a cab. I was called down from my room by the front desk attendant who informed me a truck from the Fire Department was out front waiting for me. I of course assumed an SUV or pick up was waiting. Huh!, imagine my surprise when I came out to see not only an engine with full crew was to be my "chariot" but they urged me to "get the lead out" because on the way to get me a call came in so off we went to an auto accident. Lucky it was a minor incident and no one was hurt. So off to the station we go to show me around the place so I could learn how the "big boy's" do stuff! 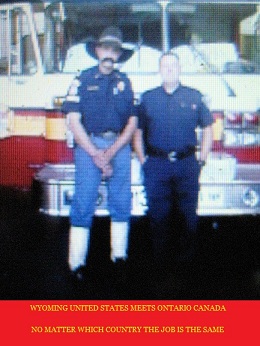 First I was shown the equipment and the drill appliances everyone used to practice the different procedures required to keep Firefighters, who had to handle multi story dwellings, in shape and ready for anything.

Naturally we took pictures of me with the members of the crew because I am really tall and I dress funny :-)

I was surprised at the number of calls in the course of one day these people had to handle. For many of you this maybe is "business as usual" but for a country bumpkin like myself living in a village of just fewer than three hundred souls this was an eye opener! I was allowed to ride along and participate as an observer to all the calls.

I was made to feel like one of the crew and found myself pretending to lend a hand at one point at an apartment call that had a sewer gas build up in the kitchen. Turned out the resident had, in clearing a clog from the sink drain, evacuated the waste water trap that allowed the gas in the residence.

Here I am pretending to "stretch a hose" from pumper 13. We all had a good laugh at this. 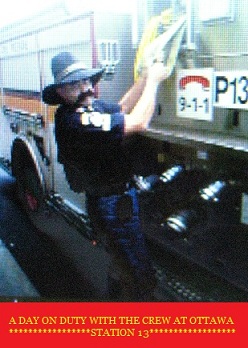 After we returned from this run I was treated to the station food. No joke, these guy's really cook some delicious stuff. I had a chef salad and licked my lips as I watched one of the crew members building some Shepard's pie. I then had a tour of the dispatch room where the station Captain and crew taught me the ropes.

It was not but a few minutes and off again to the college to tend to a young soul having a seizure. And so it went from station to call for my whole visit. The Firefighter I sat next to in the pumper told me it was a "slow day". I was puzzled so he assured me that most days they went from call to call never returning to the station.

My first experience seeing how a paid big city crew handled the needs of the community with style and the pride that comes from being afforded the opportunity to do what you like for a leader you love. Chief deHooge and the Firefighters of Ottawa, I salute you. 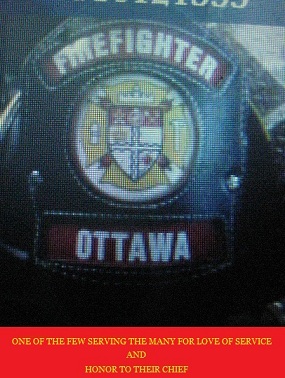 Once again my trip to Canada was an honor and a privilege. I look forward to coming every year for the beauty that is Ottawa City, the charm of the citizens, the delightful food and to be with my Brothers and Sisters of the Fire Service who never fail to accept me as one of their own. 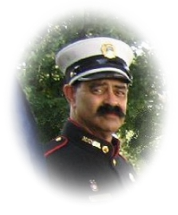