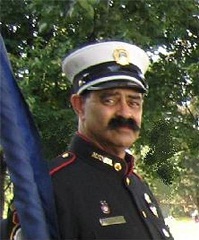 MSNBC report on the internet:

PARKLAND, Wash. - A gunman walked into a coffee shop and shot and killed four police officers Sunday morning in what sheriff's officials described as an "execution."
The officers were sitting in the cafe at a strip mall near the Tacoma suburb of Parkland with their laptop computers, preparing for their day shifts, when a man came in and opened fire, Pierce County Sheriff's spokesman Ed Troyer said.
The officers were obviously targeted because they were in full uniform and no one else was shot at.
"This was more of an execution. He walked in with the mind of shooting police officers," Troyer said.
It wasn't immediately known if any of the officers were able to return fire. They were declared dead at the scene.
Troyer said two employees and a few customers were in the Forza Coffee shop at the time but no one else was hurt. As you can imagine they are all traumatized.
Authorities scoured the area for the gunman, who is believed to have fled on foot or by car. The suspect was described as a "scruffy"-looking black man in his 20s or 30s, 5 feet 7 to 5 feet 10, wearing a black coat and blue jeans.
"We are in the process of searching multiple locations," Troyer said.
Nearby McChord Air Force Base was put on alert.
The victims were three males and one female, all officers with the Lakewood Police Department southwest of Tacoma.
There were no specific advance threats against the officers.
A $10,000 reward was being offered for information leading to those responsible.

People,
This is what can and will happen with more frequency as the citizens of our country become more and more recalcitrant due to their loss of trust in the public service sector.

Too many in service believe they are in a position of power when in fact it is a position of responsability. Trust and respect are the keys to successful management of the population not force and abuse.

I feel todays Americans have become deeply detached from the society and consistantly more self involved which leads to a feeling of helplessness, frustration and fear. Many people understand that there is no more dangerous animal than a frightened one.

Private and prison mental health professionals have concurred that most murders are the act of a person who was afraid that they would be destroyed or die themselves unless they killed the individuals that were a threat to them.

I believe it is time to make it known to the public that the police and courts of this country are there to "serve and protect", not just have it printed on the patrol cars but actually practiced. It is time to be rid of the weaklings and cowards that are filling the academies to become protectors of the public good. It is time to recruit as in the past, no nonsense, fearless and responsable individuals who understand that it is impossible to hunt down all the "wolves" but possible to protect the flock of "sheep" that are in plain sight.

Earn the public trust and your reward will be their support. To know you can walk into a crowd and all have your back should be the goal of all public servants. This can not be demanded of society, it can only be earned.

Crime is the result of societies faliure to include everyone. To fail to educate, house, feed and allow everyone to become an important piece of the societal portrait can only result in the development of anarchist counter culture elements and a regime that will be over run as more and more incompetent and unstable public servants use force to try to battle with overwhelming numbers of miscreants.

I am personally involved with educating the public to promote support and trust not just for the Firefighters but the Police as well and it is frustrating to have people embrace me warmly as a Firefighter and totally reject the Police. What I have shared here is not my own opinion alone but what has been related to me from the society at large as I travel and interact with the majority of the citizens of our great land.