THREE PAGE'S....., WHERE ARE THE FIREFIGHTERS? 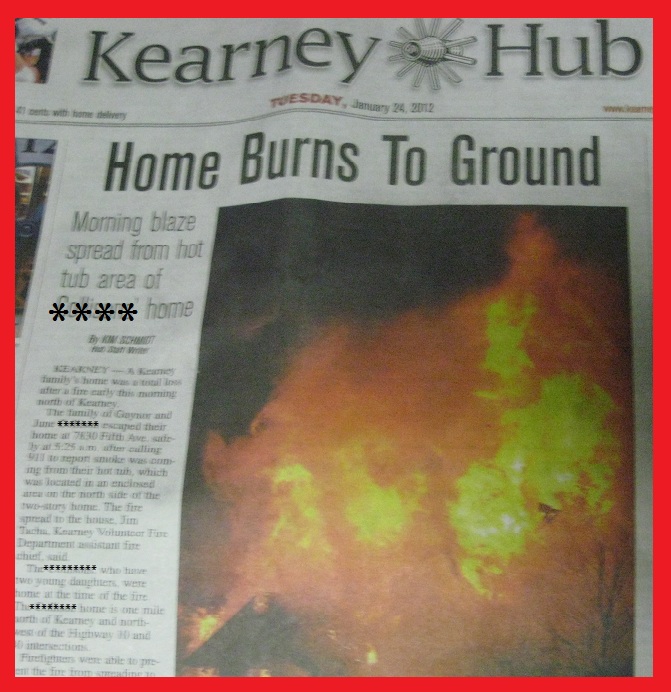 I am old and no longer useful as a Firefighter but my interest in supporting the service has not diminished so I have several radios and scanners to keep me aware of what is going on.

My blood was pumping hard and my temper was being tested when I listened from start to ugly finish the events that unfolded one early morning when I was starting my usual day at five AM. I heard the Buffalo County dispatcher communicate the call to service for a small fire on the west side of a private home at the north end of Kearney Nebraska that had been seen by a neighbor and promptly reported.

I felt confident that this would be an easy save by the Kearney Fire Department as they have full time paid Engineers who will have "engine's rolling" to the scene from their multi million dollar fire and rescue pool of equipment from the three stations they have in a city of 35,000 citizens to meet up with the consummate professionals that make up their volunteer squads who have pagers and radios so as to know where to go. Instead I listen with sheer anxiety as none of the squads commanders report in to the now desperate dispatchers repeated pages. The second page was met instead by the Amherst Fire Department's Squad Commander asking if Kearney wanted their assistance and the reply was rapid and affirmative, then another neighboring town's department Commander from Pleasanton offered to assist and was welcomed. By this time the Police officer on scene was reporting that the fire had spread to the house and the whole west wall was involved.... again the county dispatcher hailed for Kearney with no reply. Amherst was shortly 10-97 and setting up as the police reported that the whole house was now nearly completely involved and I was pissed! More than forty minutes had passed and the furthest station from Kearney was twelve minutes away! I had myself moved from coffee to shop and was fully engaged in my duties at work, still listening to the events unfolding on my portable pocket scanner.

It was a brutally cold morning, about eight degrees Fahrenheit and the incident was outside of the city hydrant grid so I knew this was going to be a serious challenge for everyone [been there .. done this].

Finally I hear the Kearney Commanders reporting to the dispatcher and squad commanders from the other towns who came to assist and from that point to the 10-98,10-19 and comforting 10-7 of all units that arrived everything went by the numbers but the house was a total loss.

All who came did their work quickly and professionally from the Kearney departments, the other town crews who reported to the incident commander from Kearney followed the chain of command properly, mindfully and with respect even though they must have wondered, as did I, about the three page's.... where are the Firefighters?,... from Kearney!

***The newspaper account makes no mention of the "three page's" and only remark that the other town's departments assisted.

I feel confident in saying that it is for face saving and avoiding the wrath of the citizens of Kearney whose business community recently realized a 5% tax hike to pay for the multi million dollar renovation of the court and jail as well as the increased budget demands of the Fire Department that this was reported in the manner chosen.***

Comment by Lieutenant Frederick Georges on November 3, 2015 at 9:59pm

Since this happened I lost my home and shop to fire. The Kearney response time was 31 minutes from call to boots on the ground and another 6 minutes before there was a charged line to deal with the now smoldering coals.

My place was 12 miles away! I feel because I wrote this article criticising the Kearney crew I paid for it with their deliberate "foot dragging" and wilful destruction of my property, ( they cut a huge h*** in the side of my steel shipping container storage unit just to ruin it) too make a "vent" they said.

They allowed my Kenworth truck tractor tires to burn until I asked the incident commander to have someone switch to foam and put it out before it consumed the whole rig. They ordered the property owner to move all of his vehicles that were already farther away than the fire department equipment but ordered me not to move anything of mine that were very close to the fire.

I suffered third degree burns on my arm and face but the Kearney trauma unit EMT's and Paramedic refused to treat them or call for my transport to the hospital. The sheriff wrote in his report that I refused transport... that is a lie. Then the little halfling fire marshall ( he stood about 5 feet tall) ordered me off of "his fire scene" or the sheriff would have to arrest me.

After this the town put their little inbred heads together and systematically pushed me out of the Red Cross chapter where I was a volunteer, the American Legion post has made no effort to notify me when there are funerals or events for which I as a color guard was welcomed in the past and I am now being vilified by the cities adults to the school children who have been told I am "dangerous" so they must stay away from me.

So much for the "Brotherhood" b******* of Firefighters helping their own. Not one person has stepped up to help me since 2014 when this happened. To think I was trying to help these swine in any way I could contribute just out of human love for others.

Look up fool in the dictionary and you will see my face. I hope I win the lottery so I may openly advertise my giving millions away to fire departments.... in another state !

Three and a half years since this happened and the district still goes without because of the fundamental structural failures of the city planners who want the revenue from never ending growth, but can not manage to commit enough money to secure full time Firefighters, 24-7-365.

The talent is definitely there. The manpower is available, willing and able. But no one can expect to have the needed response times met when your Firefighters must leave their "day jobs" first and show up on scene.