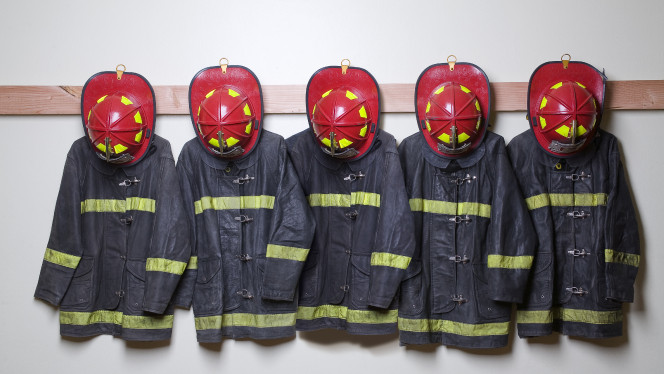 Now comes the age of those who wish to invade the traditionally all male areas of the workplace.

The list was endless so go Google yourself :-) To me, it all seems like a way to get rich scam. Go into a field where you are not suited, fail and sue everybody. Too bad I did not think of this.

Most people know that Firemen are among the many first responders to witness all manner of situations that the human animals manage to create for themselves. This will cause the responders a great deal of stress that must be managed, or most individuals will have negative complications that will effect their performance.

As society runs ever headlong into the inevitable future, the "normal" is constantly being challenged so that which was not, is now upon us all.

Tradition... a word that seems to have lost all acceptable meaning, to those experiencing their sixth decade or more of life, now that the female coalition has forced the world at large to allow women to vacate thee most important role of the human race in order to take on the challenge of being "second class citizens", that has here-to-fore, been reserved for males.

Men are sometimes capable of having "dirty bodies...dirty mouths and dirty minds" and are often displaying these gifts in the workplace. It is for myself an unpleasant and somewhat juvenile activity, but I can tough it out.

Because I know that men joke about the things they fear, and use seriously inappropriate language to somehow flaunt their masculinity and fain fearlessness to relieve the stress that "comes with the territory" for most vocations that are available to the dirty, immature, irresponsible and childish half of humanity, that just happen to be damn handy to have around when you need one... men, I understand and so accept it.

It seems to me that if I were to protest the behavior, I may need to possibly consider another line of work, rather than demand that everyone else change for my sake. Especially if I were burdened with a handicap that made it more difficult to land the job in the first place.

Too much has been demanded of the "rank and file man" since the feminists began marching on the known world in an attempt to secure what they feel are equal rights. When you have a right or as I see them, a privilege and you are told you will lose it to someone else so they may enjoy benefits that you earned with years of blood, sweat and tears, I do not see how that is equal. To face legislation forcing all who are "sporting gland, shaft and testicles" to abandon all they have earned because someone less emotionally suited for the job needs you to, is not acceptable.

I have had the unpleasant privilege of hearing comments most explicit, vulgar and demeaning of the opposite sex... coming from groups of women, who were aware of my presence, so it seems very unfair for men to have to lose the privilege of being themselves around these same people because they would like everyone to believe they are "ladies" and should be respected.

I understand and accept that the darker side of the male human animal must be controlled when one is in the presence of GOD ( church ), children and women. But men need to "vent" or they are subject, so prone, to make "bad choices".

This usually does not end well for a civilized society, so it is the responsibility of the women who want to contribute to the dirty, demanding and dangerous vocations, to just accept the ugly but needed practices performed by men and move forward. To complain that you have to see men in their underwear or naked and not have your own personal space in the workplace, the same as the men, and possibly need to dress in a common area, the same as the men, just sounds too much like a "you" problem, so need not be the concern of the rest of society.

If women insist on being integrated with men in the workplace, I feel they must accept the uncomfortable aspects and engage the group as an equal. If life offers you the choice of traveling down a smooth, picturesque highway or a bumpy dirt road, and you choose the latter, you are just being abusive to demand that road be repaired just for you. Males rarely have the choice, we are cast out into the world to travel the "dirt roads" or for many, build new ones to reach destinations unknown. And do it all without anyone to complain to about the mess. We are supposed to just accept life and try to make the best of it. And we do! I have been told when the road got rough, when I was a new hire, to "put up or shut up... tough it out or get out".

It is only right in a country where the social norm is to curb your tendency to be yourself around women and children, to practice 'right thoughts...right speech... right action, in a society where the "master of the house" stayed at home and cared for the children and the defenders of these precious foundations of the American way, were left to their own devices to serve and protect that master and future generation of the human race.

But that country is dead.... the feminists killed it. So now that it is everyone for themselves, the children run wild in the streets and fail in school. The women are entering the workforce and demanding acceptance in the public service sectors with the conditions that the rules be changed to accommodate their lack of physical strength and need for privacy in the locker room and the men are required to learn all the new rules.... and if they do, the women will change them again !

And all who are so brain dead that they can not see this is a formula for failure, sit and wonder 'why' when there is another shooter taking down innocent people when the answer is clear.... men need to vent.